This project is now complete, and extensive information on work done, outcomes and further reading is available here

SalmoSim successfully demonstrated that the salmon gut microbiome could be modelled. We have since developed the system further to simulate digestibility of feed ingredients, as well as their influence on gut microbes. With several commercial clients now on board, the project is a nice example of where basic and applied science meet to drive innovation. – Dr Martin Llewellyn of SalmoSim

A go-to diagnostic system for testing new feeds prior to in vivo trials, providing deeper insight and driving down the costs of bringing new products to market. 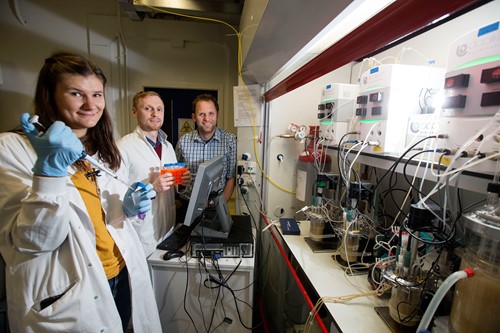 Farmed Atlantic salmon (Salmo salar) must be provided with compound aquafeeds that meet all their dietary requirements. Once consumed, a feed pellet will pass through the salmon’s digestive system which, as in mammals, has a stomach and middle intestine. However, in between these two segments there is an additional compartment known as the pyloric caeca. Like all animals, the salmon intestine contains its own ecosystem of microbes, referred to as the microbiome. Although researchers have described the microbiome of salmon, we are still at the beginning of understanding how the intestinal microbes interact with the salmon’s immune system and how it responds to different feed ingredients.

Feed additives, especially prebiotics and probiotics, are added to enhance or alter the composition of the gut microbiome, to elicit a benefit to fish health and welfare. A prebiotic is an additive that feeds the microbiota, whereas a probiotic is a microbe that is delivered to enter the microbial community and influence its composition or function. A probiotic is a live micro-organism that positively modulates host welfare and performance, including via modulation of the intestine’s microbial community.

Usually, to assess these materials, researchers feed them to live salmon and study the influence they have on digestive physiology in fish. Inspired by work on human gut simulators, the team at the University of Glasgow set out to develop a model salmon gut, so that the salmon intestinal microbiome could be studied in the laboratory. Feed additives could then be tested for their effects on the microbial community to see if they elicited the desired response before being tested in live salmon trials. This would provide pre-trial data that helps researchers to better design subsequent live trials and to screen out ingredients that do not produce the desired effects before committing to live trials.

The team collaborated with Mowi, a world-leading salmon producer; Alltech, a supplier of specialist feed additives to the aquafeed sector; and Nofima, a leading aquaculture and fisheries research organisation in Norway.

The aims of the project

1.    Sample and describe the intestinal microbiota of Atlantic salmon in Scotland

In collaboration with the commercial partners the academic team took samples from the stomach, pyloric caeca and mid-intestine to establish a baseline description of the salmon intestinal microbiota. More than 30 salmon were sampled from commercial sites.

The authors measured: temperature, dissolved oxygen, pH and redox potential, to establish the physico-chemical environment of the salmon intestinal compartments.

Next generation sequencing techniques were used to identify all the species (Operational Taxonomic Units) of bacteria living inside the salmon intestine.

Temperature across the salmon digestive system was relatively stable, 10 – 12°C. Average pH of stomach samples was 3.7 and this increased to 7.0 in the pyloric caeca and 7.6 in the mid-intestine. Dissolved oxygen was low across the salmon intestinal compartments (0.03 – 0.04 mg/L) and redox potential was consistent with an anaerobic environment.

Q-PCR assays were developed for all eight major classes.

The bacteria communities and physical variables informed the authors which physico-chemical conditions the compartments of the SalmoSim system needed to emulate.

A bioreactor is a vessel where the physical and chemical environment is controlled by the operator to establish processes driven by micro-organisms. An everyday example is the fermentation of sugars by yeasts in the production of bread or alcoholic beverages. In the SalmoSim intestinal compartments the authors were able to control temperature, pH and oxygen.

The SalmoSim system was operated at a constant temperature of 12°C and anaerobic conditions (nearly zero oxygen) were maintained by flushing with nitrogen gas. The stomach compartment was maintained at pH 4.0, pyloric caecum pH 7.0, and mid-intestine at pH 7.6, as informed by measurements made in situ.

To simulate the microbial community the researchers seeded (inoculated) each compartment with microbes derived from the relevant intestinal compartment of Atlantic salmon. Observations were made to establish the experimental protocols, an establishment phase where the system runs statically, and a stabilisation phase were required.

These communities were monitored every two days using qPCR primers against the eight classes of bacteria and next generation sequencing was also used to describe the communities in higher detail to establish the time taken for the system’s microbiome to stabilise.

Experiments were carried out to compare the microbes within the SalmoSim system to the gut compartments of live salmon.

The researchers found that four days was a sufficient establishment phase to allow the bacteria to become established in the intestinal compartment (Stomach, pyloric caeca and mid intestine).

The SalmoSim stabilisation phase was then started, so that material was transferred from stomach to pyloric caeca to the mid intestine. Through experience the researchers found that the system took ~20d for the microbial communities to stabilise.

Not all runs established similar communities of bacteria, indicating that repeatability was imperfect and so this was controlled in the statistical analysis (run random factor).

3.    Pilot comparison of response of SalmoSim vs cohort of live salmon to change in feeding regime

A comparison of the system to a real feed trial to establish if fish diet changes could bring about similar changes in the microbiome between the real salmon intestine verses the SalmoSim system.

The SalmoSim system was compared to a feed trial in salmon, the salmon’s feed was changed from a fishmeal diet to a fishmeal-free diet. They then replicated this trial within SalmoSim by switching the feed after the 20-day stabilisation phase and sampled the system for a further 20 days.

The SalmoSim system was sampled every two days and samples were analysed for the bacterial species present using qPCR probes specific to the bacterial groups listed above. A range of species richness and diversity indices were used to compare the SalmoSim microbiota to the samples collected from the real feed trial, the inoculum (starting cultures derived from salmon) and the different intestinal compartments.

From interpreting the q-PCR-based estimates of abundance of microbial taxa, both similarities and differences were observed in response to changing from a fishmeal to a fishmeal-free feed. The microbiota within the SalmoSim system were more sensitive to a change in-feed than the real salmon intestinal microbiota (in vivo).

Based on sequencing data, in real salmon a switch to a fishmeal-free feed had no impact on microbial richness and diversity. Within the microbiota of the SalmoSim system diversity indices (but not richness indices) were increased only in the pyloric caecum compartment. The SalmoSim stomach and mid-intestine compartments did not display any differences, showing that in terms of richness and diversity the SalmoSim system and real salmon intestine were reasonably similar.

Based on sequencing data, a shift in microbial community composition was observed in response to switching feed both in vivo, as well as in SalmoSim. Consistent with the qPCR data, more microbes changed abundance in the SalmoSim system in response to a switch in feed than in real salmon.

Switching the feed had no significant effects on volatile fatty acid production in the SalmoSim system – consistent with limited changes in the microbial community in response to the change in diet.

The authors conclude that SalmoSim can maintain a representative community of microbes that are similar to those present in the live salmon intestine. The measured responses of those microbes to a change from a fishmeal-based feed to a fishmeal-free feed are similar but not identical.

This project developed the first laboratory model of the salmon intestinal microbiota, SalmoSim, and investigated how this model compares to a change in feed.

The purpose of the SalmoSim system is to screen feed additives for their potential effects on the microbiota of salmon, as well as their digestibility and the team are commercialising the concept. This should save time and expense when compared to undertaking live fish trials, but the system complements live testing rather than replacing it. SalmoSim therefore offers the salmon sector a novel service in the screening of ingredients for aquafeeds.

Since completing the SAIC-supported innovation project SalmoSim has secured interest from manufacturers of feed additives to trial new products before committing to larger projects in large fish.

“SalmoSim successfully demonstrated that the salmon gut microbiome could be modelled. We have since developed the system further to simulate digestibility of feed ingredients, as well as their influence on gut microbes. With several commercial clients now on board, the project is a nice example of where basic and applied science meet to drive innovation.” Dr Martin Llewellyn of SalmoSim

“The team has made great progress since the project started and it is good to see such positive results from a collaborative research and development project. The gut simulator could be hugely beneficial for addressing some of the sector’s biggest challenges around fish health and sustainability, particularly for companies developing alternative feeds or new digestible medicines. SalmoSim is a great example of the ground-breaking research taking place in Scotland that has the potential to make a significant difference to the worldwide aquaculture sector, as well as shape the sustainability of global food production.” Heather Jones, CEO, SAIC

The project and subsequent start-up business have been extensively covered in the trade and mainstream press:

Leonie Maier (2017). Exploring the role of neutral and deterministic processes in the driving the assembly of the Atlantic Salmon microbiome.

Alexandro Busetti. (2016-2018) Mapping the the diversity of the Atlantic Salmon gut microbiome

SalmoSim® was founded to fill a gap in applied research and development systems of salmon aquaculture: a comprehensive simulator of the salmon gastro-intestinal tract. The business aims to understand the relationship between aquaproducts, nutrient bio-accessibility and gut microbes in order to improve the productivity and sustainability of farmed salmon.

The SalmoSim® system is designed to dramatically reduce the in vivo testing costs involved with bringing innovative feed ingredients to market.

The aquaculture sector is changing rapidly, with many seeking to find more sustainable ingredients for fish feed that can support future growth as a substitute for wild-caught fish. SalmoSim can help feed manufacturers with an important pre-screening phase, allowing them to eliminate unviable options without the time and expense associated with full-scale tests.

In December 2020, SalmoSim secured its first commercial contract with California-based Calysta, supporting trials for a sustainable alternative protein source that could be rolled-out across the global aquaculture industry. Read the full story here. and see The Fish Site's article on validating in vitro feed trials here.