Establishment of guidelines for the use of hydrogen peroxide (Paramove®) at reduced salinities for control of sea lice and assessment of the safety and efficacy of Paramove® at a range of dosages in relation to seawater salinity.

Sea lice infection represents a major health challenge in commercial Atlantic salmon production. The economic impacts to the global salmon farming industry, which include treatment costs and production losses, have been estimated at ~£700M for 2015. In the North Atlantic, lice infections are mainly caused by the salmon louse Lepeophtheirus salmonis.

Sea louse control incorporates integrated pest management approaches that employ a wide range of different measures and tools, which include, in addition to veterinary medicines, farm management approaches such as fallowing of sites, as well as non-medicinal sea lice treatments. The latter include freshwater baths, which have been suggested to control both caligid infections and AGD, as both pathogens have limited tolerance to reduced water salinity. While the combination of freshwater baths with topically applied veterinary medicines such as H2O2 could potentially provide benefits, studies systematically assessing this possibility are currently not available.

The overarching aim of this project was to establish guidelines for the safe and efficient use of hydrogen peroxide at a range of reduced salinities for the control of sea lice. To achieve this, the project aimed to address several objectives:

The effects of H2O2 on pH and redox potential were studied at different water salinities – 0, 5, 10, 15, 25, and 34 – obtained by mixing local seawater (34) with appropriate volumes of different types of freshwater (soft, moderately hard, hard, and very hard).

University of Stirling aquarium water (dechlorinated charcoal-filtered city water) served as a soft freshwater, while the remaining types of freshwater were artificial. The alkalinity of seawater and the different freshwaters tested and used to make brackish water of the above salinities was measured by HCl titration.

A 1L beaker containing 500 mL of test water, as well as an airline, a magnetic stir bar and probes for temperature, pH and redox potential, was placed in a water bath kept at 12°C.

H2O2 was added in a volume of 500 mL of test water to produce the desired final concentration. Redox and pH were recorded for 20 minutes.

In all conditions, addition of H2O2 led to a fast decrease in pH, with a minimum reached within 30 seconds of the addition, followed by a slow increase over the remaining 20 minutes.

However, changes in pH after addition of 1600 mg/L H2O2 to full-strength seawater were marginal (maximally ~0.35 units). With all waters studied, pH changes were more pronounced with 3200 than with 1600 mg/L H2O2. No clear relationships between salinity and pH, or between the nature of the freshwater used (soft, moderately hard, hard, very hard) were observed.

As was expected with an oxidising agent, addition of 1600 mg/L H2O2 caused an increase in redox potential of about 15%, with no clear effect of water type on the degree of increase.  Redox potential remained stable until 20 minutes after H2O2 addition, i.e. the typical duration of treatments.

In freshwater treatments involving water of low alkalinity, low pH could potentially cause complications due to its positive effects on electrolyte permeability of the gills. However, changes of water pH observed in this study after addition of clinically relevant H2O2 levels remained well within the pH range tolerated by salmon for all water types studied.

Sea lice (Lepeophtheirus salmonis) used in bioassays were from strain IoA-00 maintained in culture at the Marine Environmental Research Laboratory (MERL), which has been established from an isolate collected at a Scottish farm site in 2001.

Bioassays involved two hours and 40 minutes of pre-exposure of sea lice to the experimental salinity, followed by exposure to H2O2 at the experimental salinity for 20 minutes. Sea lice were then transferred back to seawater and their attachment and locomotion behaviour rated both immediately and after further incubation (24 hours). Lice behaviour was rated as live, weak, moribund or dead; the latter two (moribund or dead) considered to be affected by the treatment.

In control treatments, lacking H2O2, decreasing salinity was associated with increasing behavioural responses of sea lice in bioassays, an effect that was more pronounced in females than males.

At salinity 34, H2O2 effects were predominant allowing the derivation of H2O2 EC50 values, while at low salinities of 0-2 the effect of salinity was predominant and H2O2 effects could not be statistically resolved. The H2O2 susceptibility of IoA-00 lice strain determined at a salinity of 34 is in line with previous results, confirming that while the strain responds to levels of H2O2 typically used in treatments, it shows indications of some hyposensitivity to H2O2 at lower concentrations.

Prior to testing the therapeutic efficacy of combined freshwater and H2O2 treatments, the safety of this approach was assessed by exposing naïve fish to both treatments simultaneously and monitoring fish survival and behaviour during the exposures and until 24 h after the treatment in order to ascertain the absence of adverse effects. The efficacy study aimed to assess whether combining H2O2 treatments with low salinity would have the same or different delousing efficacy compared to H2O2 treatments in seawater, and whether pre-exposure to decreased salinity treatment would have an effect in delousing efficiency.

Post-smolts (minimum weight 150 g) were maintained in flow-through tanks, with continual O2 monitoring and 18L:6D photoperiod. All fish were in good health and condition.

Tests carried out to confirm the safety of H2O2 treatments at reduced salinities included three different salinities (3, 10, and 35) and two temperatures (12°C, 14°C). For each combination of salinity and temperature, the effects of H2O2 were investigated at two concentration levels (1200 and 1600 mg/L) as compared to an untreated control. Each treatment was run with four replicate tanks, each containing six fish. After overnight acclimatisation, the fish were exposed for three hours to the experimental salinity, followed by 20 minutes of exposure to H2O2 at the same salinity. Next, fish were transferred to clean full-strength seawater at the experimental temperature. They were regularly checked for survival and abnormalities in appearance or behaviour for 24 hours after test.

Once safety of treatments had been ascertained, a new batch of fish were infected with IoA-00 strain salmon lice, with one experimental infection being performed per tank. After the infection, fish were maintained together until lice had reached the chalimus stage, at which point infected fish were randomly assigned to separate holding tanks, each of which received 20 fish. Once lice reached adult male and pre-adult-II female lice stages, the fish were subjected to experimental treatments.

Experimental treatments were prepared as static baths containing water of different salinities (33, 15, 3 and 1), to which fish carrying sea lice were transferred and allowed to acclimate for 2 hours and 40 minutes, after which 1200 mg/L H2O2 was added to the baths to start a 20 minute exposure to the veterinary medicine at the given salinity. In addition, H2O2 effects were tested without previous salinity acclimation at salinities of 33 and 1 (20 min exposure only). On completion of exposures, fish were returned to the holding tanks containing full strength seawater, minimising physical removal of sea lice during handling. Bath solutions were filtered to recover any sea lice detached during treatment. Sea lice were counted the day after treatment.

During and after tests no fish mortalities or abnormalities in appearance or behaviour were observed, confirming the safety of the above combination of bath treatments in the laboratory scenario. 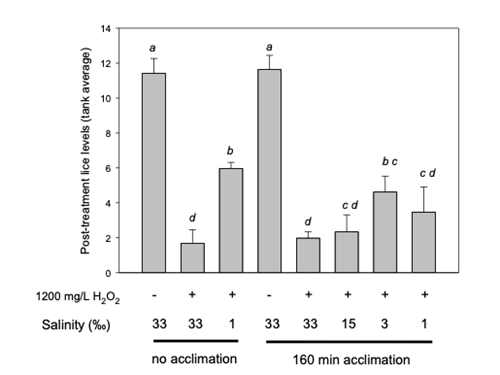 The figure above shows the outcome of H2O2 (1200 mg/L, 20 minutes) treatments at different salinities, with fish carrying lice being allowed to acclimate to salinities (“acclimation”) prior to the veterinary medicine being added, or fish being directly introduced to tanks containing both H2O2 and water of the tested salinity (“no acclimation”). Compared to untreated control tanks, in which the average number of lice was around 11.5 per fish, H2O2 treatment (1200 mg/L, 20 minutes) at a salinity of 33, i.e. close to full-strength seawater, significantly reduced levels of lice on the fish, with 85% of sea lice removed.

While H2O2 treatment under standard conditions resulted in satisfactory louse clearance, reducing the salinity during H2O2 treatments did not result in improved salmon louse removal outcomes compared to the clearance achieved in seawater. On some occasions, H2O2 treatments at reduced salinity performed worse than the corresponding treatment in seawater.  The reasons for the reduced efficacy of H2O2 in these cases are unclear.

As the efficacy study did not provide evidence that carrying out H2O2 treatments at low salinities is associated with clearly improved outcomes, it did not seem advisable to further investigate in commercial production treatments within well boats.

In this study, the outcomes of in vivo efficacy trials contrast findings from in vitro bioassays, in which exposure to low salinity impacted the viability of salmon lice and showed apparent additive effects when combined with H2O2 treatments. To explain the differences between in vitro and in vivo results, it is useful to consider that bioassays have been designed to assess the susceptibility of lice populations to medicines, and not meant to assess the impact of environmental factors such as salinity on treatment efficacy. Importantly, in vivo and in vitro trials in this study differed with regards to the scale of exposures as well as the physical environment of the parasites, which may have affected the effect of the medicine as well as biological response of the salmon lice to the treatment.

In order to compare results from this study to the real world situation, researchers were provided with data from earlier tarpaulin bath treatments, carried out in a commercial rainbow trout farming scenario over a period of two years at sites that are naturally subject to salinity changes. 50% of the H2O2 treatments had an efficacy >75% and five of 12 treatments resulted in less than 40% louse clearance. While treatment success was unrelated to ambient salinity levels, the variability of clearance levels may derive from a number of additional unidentified factors.

At concentrations typically used for salmon delousing, hydrogen peroxide (H2O2) caused only moderate shifts of pH when added to freshwater or brackish water. In line with this, H2O2 treatments at low salinities, achieved by mixing freshwater and seawater at different ratios, were well tolerated by salmon smolts. However, while lowered salinity and H2O2 showed additive effects on sea lice in in vitro bioassays, decreasing the water salinity during treatments of fish carrying salmon lice did not result in improved lice clearances compared to treatments in regular seawater.

The difference in findings between in vitro and in vivo tests raise the question as to whether in vitro bioassays are capable of predicting treatment outcomes for H2O2 on salmon farm sites, particularly under conditions of variable salinity.

Doubling up against sea lice | The Fish Site