This project sought to optimise genomic selection in salmon breeding to improve the accuracy and affordability of the technology, with an end goal of applying these innovations to advance the breeding of salmon stocks with increased gill health and resistance to sea lice.

The project achieved its primary aim and objectives with significant developments in breeding for disease resistance, with a focus on gill health and sea lice traits. Cost-effective methods for genomic selection using low-density genetic markers were developed for sea lice resistance, and were extended to other target traits and species.

This project is now complete. You can read the full case study by clicking the button below, for extensive information on work done, outcomes and further reading.

Methods for improving disease resistance are high priority areas for the global aquaculture industry with Scottish-based companies and universities at the forefront of developing these tools; however, wide-scale implementation remains prohibitively expensive for much of the sector.

The primary objective of this project was to optimise genomic selection in salmon breeding to improve the accuracy and affordability of the technology, with an end goal of applying these innovations to advance the breeding of salmon stocks with increased gill health and resistance to sea lice. The optimisation will include (1) the use of genotype imputation to make a step-reduction in cost of genomic selection, and (2) the inclusion of functional genomic variants within the genomic selection panels.

To achieve this, the following aims were established:

The results of the project have been widely and rapidly disseminated across the sector to benefit aquaculture breeding and production.

For successful implementation of genomic selection, there are two groups of individuals for which genome-wide marker information must be available:

Genomic selection uses genomic and trait information on the former (i) to predict the disease resistance of the latter (ii) based on genomic information only. To test the effectiveness of genomic selection in the long term it is important to assess response to selection, but this is not practical within a single project. Therefore, in the short term it is possible to test the accuracy of breeding value predictions using genomic data by using large populations of individual fish with genome-wide genotype data and trait measurements. Analyses are then typically performed whereby subsets of the individuals have their trait measurements masked, and the accuracy of predicting those measurements using genotype data alone is assessed.

Analyses were performed using data and samples collected by Hendrix Genetics as part of their breeding programme operations and previous projects.

The dataset on which the majority of analyses were focused was a sea lice challenge, for which all samples were genotyped for genome-wide genetic markers using a Single-nucleotide Polymorphism (SNP) array. The primary aim of the study was to optimise the use of low-density genotypes and evaluate genotype imputation as a cost-effective method of genomic prediction. Imputation allows to predict high density genotypes from low density SNP panels, using information from haplotypes that are shared between related individuals. Phenotypes and genotypes (78,362 SNPs) were obtained for 610 individuals challenged with sea lice, Lepeophtheirus salmonis. The genomic prediction accuracy of genomic selection was calculated using genomic best linear unbiased prediction (gBLUP) approaches and compared across SNP panels of varying densities and composition, with and without imputation. Imputation was tested when parents were genotyped for the optimal SNP panel, and offspring were genotyped for a range of lower density imputation panels.

These results suggest that imputation from very low to medium density can be a cost-effective tool for genomic selection in Atlantic salmon breeding programs.

Unfortunately, the lack of availability of the required data and samples at the time of the project precluded the inclusion of the Chilean species Caligus rogercresseyi as originally planned. The original objective was to employ C. rogercresseyi data to provide additional understanding of the roots of sea louse resistance traits, but this could not be achieved. Caligus elongatus was not part of the original plan as large-scale infection challenges are difficult to achieve and on-farm infections in Scotland tend to be highly seasonal and to comprise mixed louse species, which reduces the ability to specifically identify C. elongatus impacts.

Gill health and other traits:

Similar methods were tested for gill health traits in salmon, and other target traits for other aquaculture species. The idea here was to test the potential for widespread adoption of these low-cost methods for broader uptake in aquaculture globally. The utility of low and medium density SNP panels (ranging from 100 to 9,000 SNPs) to accurately predict breeding values was tested and compared in four aquaculture datasets with different characteristics (species, genome size, genotyping platform, family number and size, total population size, and target trait). 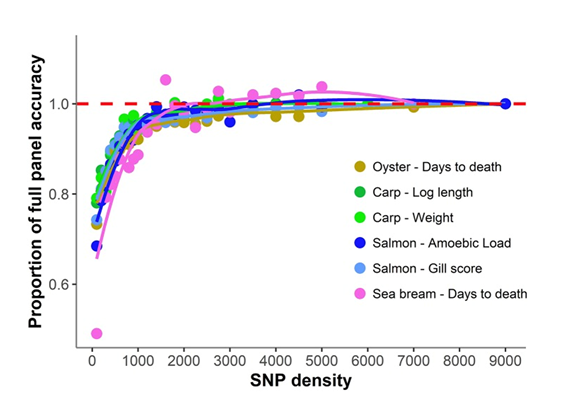 Now that a multitude of studies have highlighted the benefits of genomic over pedigree-based prediction of breeding values in aquaculture species, the results of the current study highlight that these benefits can be achieved at lower SNP densities and at lower cost, raising the possibility of a broader application of genetic improvement in smaller and more fragmented aquaculture settings.

These results helped inform application of low-cost genomic selection in Hendrix Genetics breeding programmes and facilitated testing of genomic selection methods in other species, for example Pacific oysters, where imputation was demonstrated to be an effective tool for assisting with breeding value prediction at very low marker density. It is anticipated that further transfer of this technology to other aquaculture sectors will occur in coming years, as smaller and more fragmented industries are unlikely to be able to afford genotyping with high density SNP arrays.

Based on WP1: Collection of informative trait data and samples from disease challenge experiments; WP2: Generation of genome-wide marker data for trait-recorded fish; and WP4: Identifying disease resistance genes and causative variants in the salmon genome.

While genetic variation in gill health and sea lice resistance traits has been clearly demonstrated, the mechanisms underlying genetic resistance are poorly characterised. Furthermore, breeding for disease resistance is typically performed using rather crude target traits such as gill health scores, or sea lice counts. Improved knowledge of the functional basis of genetic resistance can lead to identification of functional variants which could improve selection accuracy, but also help inform new target traits to include in the breeding goal.

One aim within this project was the characterisation of gene expression differences between farmed salmon of disparate genetic resistance based on amoebic gill disease challenges. RNA was extracted from the gill and head kidney of AGD resistant and susceptible animals following a challenge with N. perurans, and sequenced.

Comparison between resistant and susceptible animals primarily highlighted differences in the local immune response in the gill, involving red blood cell genes and genes related to immune function and cell adhesion. Differentially expressed immune genes pointed to a contrast in Th2 and Th17 responses, which is consistent with the increased heritability observed after successive challenges with the amoeba (Figure 3). 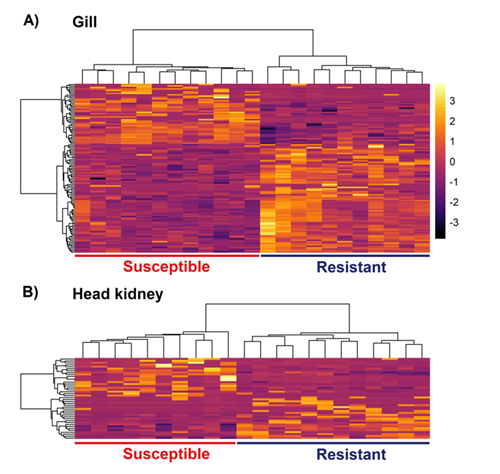 These results provide new insights into the mechanisms of resistance to AGD in Atlantic salmon, and highlights candidate genes for further functional studies that can further elucidate the genomic mechanisms leading to resistance and contribute to enhancing salmon health via improved genomic selection.

Based on WP1: Collection of informative trait data and samples from disease challenge experiments

The final component of this work was characterisation of an emerging gill health issue, based on a cohort of farmed salmon which experienced gill health issues in Chile (from a company production site for which Hendrix Genetics provide genetic management). The aetiology of gill disorders is often considered to be multifactorial. Effective diagnosis, control and prevention are hindered by the lack of standardised methodologies to characterise the aetiological agents, which produce an array of clinical and pathological presentations. This also impacts on the use of gill scores as target traits for genetic improvement.

The aim of this study was to define a novel gross pathological scoring system suitable for field-based macroscopic assessment of complex or multifactorial gill disease in farmed Atlantic salmon, using samples derived from a gill disease outbreak in Chile. Clinical assessment of gross gill morphology was performed, and gill samples were collected for qPCR and histology.

A novel total gill scoring system was developed, which assesses gross pathological changes combining both the presumptive or healed AGD and the presence of other types of gill lesions (Table 1). This scoring system offers a standardised approach to characterise the severe proliferative pathologies in affected gills. Furthermore, this gill scoring system can substantially contribute to the development of robust mitigation strategies and could be used as an indicator trait for incorporating resistance to multifactorial gill disease into breeding goals.

Based on WP6: Disseminating results and technology to the wider aquaculture sector.

The project achieved its primary aim and objectives with significant developments in breeding for disease resistance, with a focus on gill health and sea lice traits. Cost-effective methods for genomic selection using low density genetic markers were developed for sea lice resistance (https://pubmed.ncbi.nlm.nih.gov/28250015/), and was extended to other target traits and species (https://pubmed.ncbi.nlm.nih.gov/32174974/). The former was particularly notable for its development of genotype imputation methods to provide a very low-cost genotyping strategy for salmon breeding, and results received significant press attention (https://www.heraldscotland.com/news/18372164.super-salmon-project-end-scourge-sea-lice/). The results highlighted that similar accuracy of breeding value prediction could be achieved when the majority of animals were genotyped for just 200 genetic markers as when they were genotyped for tens of thousands of markers. In addition, the outputs of the project included detailed characterisation of amoebic gill disease host response in salmon using RNA sequencing methods, comparing resistant and susceptible animals (https://pubmed.ncbi.nlm.nih.gov/32228433/). Furthermore, a new gill disease syndrome was recently characterised as a case report (https://www.mdpi.com/2076-2607/9/12/2605), as a potential target trait for improvement of genetic resistance in the future.

The results of the project have been widely and rapidly disseminated across the sector to benefit aquaculture breeding and production, including via journal publications, conference presentations, and targeted press releases. The lead commercial partner, Hendrix Genetics, has used the results to inform their cutting-edge breeding programmes in Scotland and Chile and has been able to produce targeted genotyping panels for genomic selection at lower cost as a result of the project outputs. While selective breeding and genetic improvement have gradual and long-term benefit, the impacts of improved selection for sea lice and gill health traits are resulting in more robust salmon strains with higher levels of disease resistance. Finally, the consortium has also made significant contributions to important review papers on genetic technologies in UK aquaculture (e.g. https://onlinelibrary.wiley.com/doi/10.1111/raq.12553), and have used the SAIC project partnership to achieve UK and international funding to support additional research programmes targeting improvement of fish health and performance using genetic technologies.

Hendrix Genetics has used the results to inform its cutting-edge breeding programmes in Scotland and Chile.

The impacts of improved selection for sea lice and gill health traits are resulting in more robust salmon strains with higher levels of disease resistance.

The consortium has made significant contributions to important review papers on genetic technologies in UK aquaculture.

You will find an academic paper relating to this project, authored by Ross Houston and Dan Macqueen, here: Atlantic salmon (Salmo salar L.) genetics in the 21st century: taking leaps forward in aquaculture and biological understanding